April 22nd: If You Say "Gullible" Really Slowly It Sounds Like "Oranges"

So after just one night in Munich we were on the move again, this time heading for Liechtenstein and then into Switzerland. 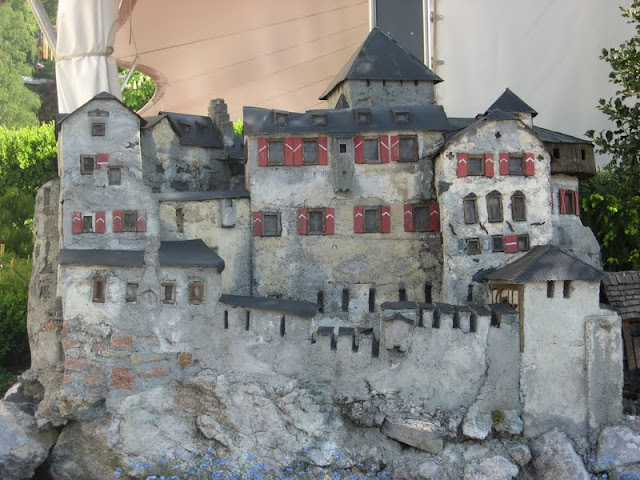 We stopped for lunch in the capital city of Vaduz, where they have a model (above) of the castle (Liechtenstein is a principality) just in case you couldn't see the actual castle (below) perched high on the hill above you. (Really, you couldn't miss it.) 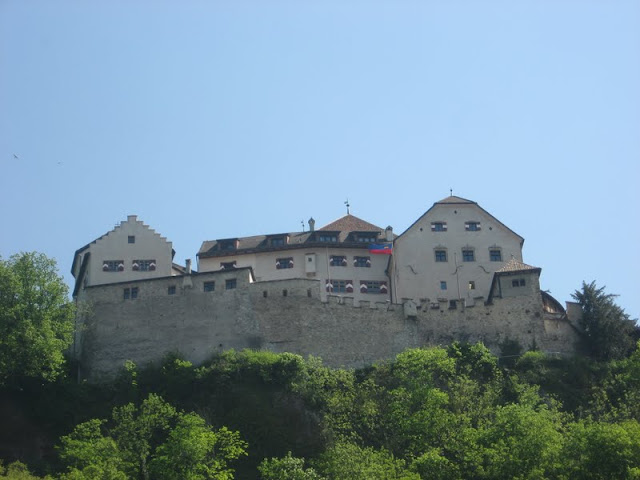 We were heading into Switzerland, where they use Swiss Francs, so after stopping at an ATM I now had four currencies on the go. 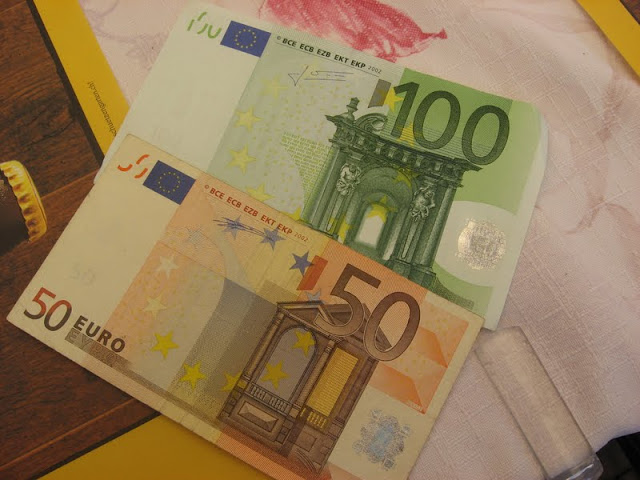 And some very colourful Swiss Francs. 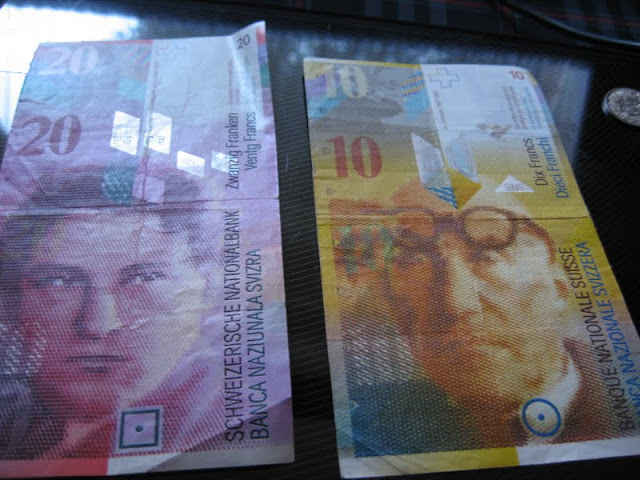 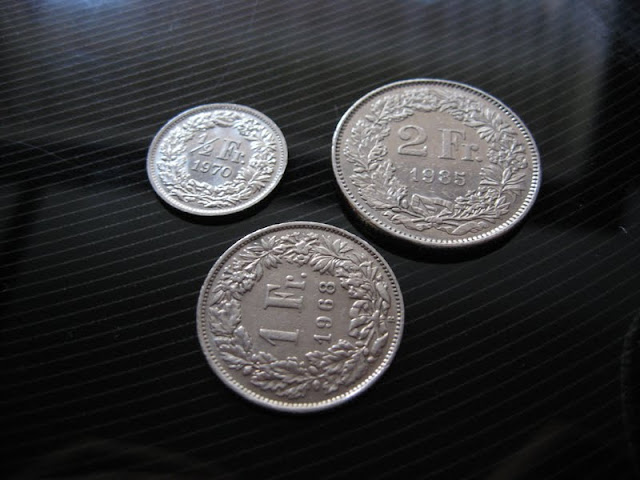 My next stop was the tourist information booth, where for a couple francs they would stamp your passport for you. I will admit that not having to stop at every border throughout Europe makes for a much more time efficient way to travel, but I've always wanted the stamps in my passport. All those blank pages are just so boring! :)

We settled in for lunch on a restaurant patio. Very average food to tell you the truth...and very North American. Cheeseburger and fries anyone?

James ordered a very expensive hot chocolate, only to discover that it was delivered in a plastic package with a cup of not-quite-hot water. And it tasted like the very same cheap hot chocolate we had been getting (for free!) with most of our breakfasts.... 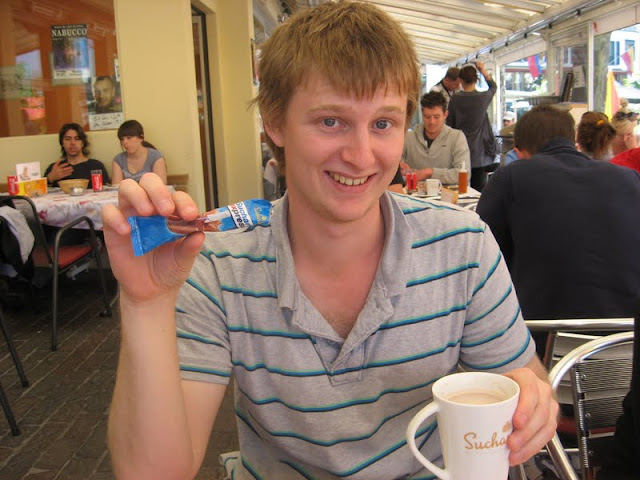 Of course, comparing that to the prices on the watches in the fancy little boutique, the hot chocolate became quite reasonably priced after all! :) 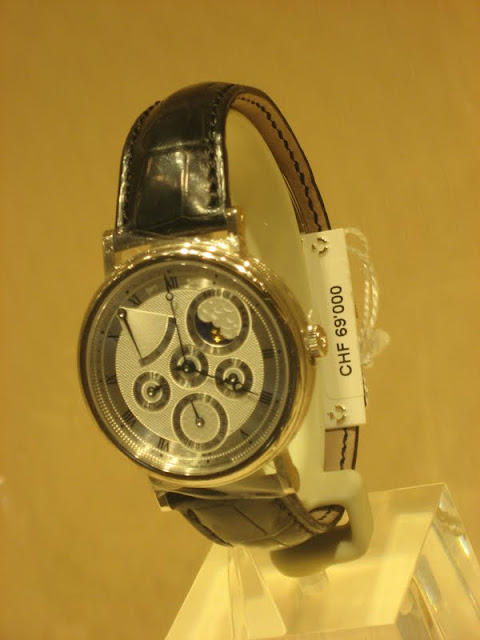 Yep, 69000 francs for a watch. I unfortunately missed out on the 250,000 franc watch displayed elsewhere in the store. I could by a small house for that! Just imagine a small house hanging off your wrist....yikes. I was feeling pretty frugal at this point with my 6 euro Eiffel Tower watch that I bought in Paris so I wouldn't be late for the bus... 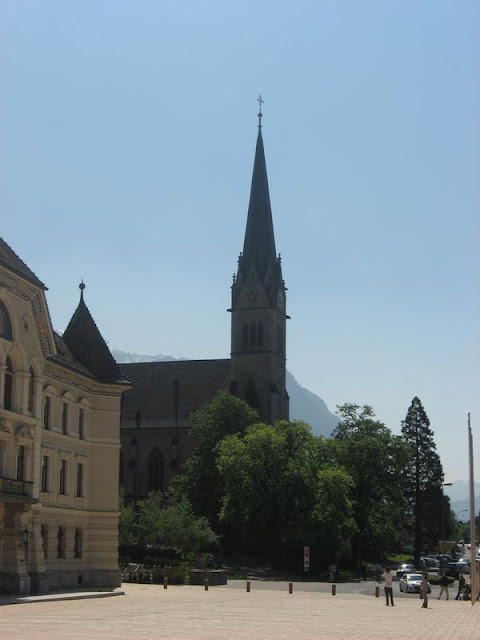 After having a chance to ogle the watches and check out the Swiss Army knives (with the hundreds of different gadgets attached in a multitude of combinations) we had a chance to wander through the town.

Lots and lots of public art scattered about... 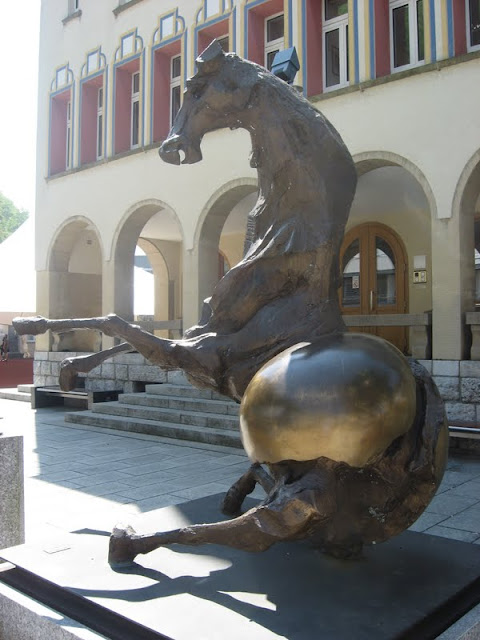 It was a very clean place. And very quiet. Not sure if that was because it was Easter Friday, or if it is always like that, but it was nice to not be in the middle of a crowd of people for once. 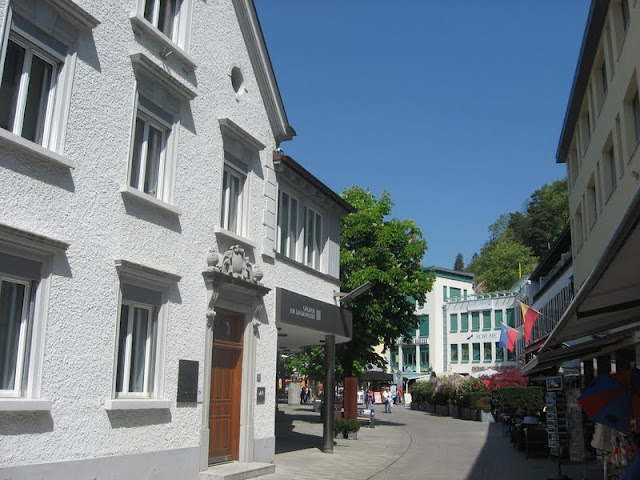 After leaving Liechtenstein we headed into Switzerland itself and ended up in Lucerne for a quick break. 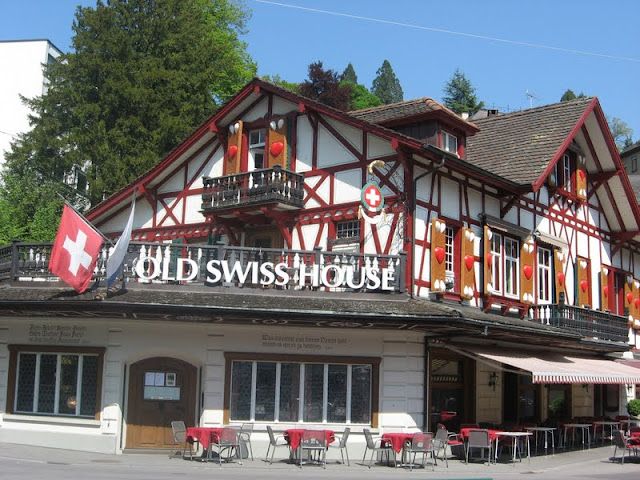 Lucerne is built around the end of a lake and the river that drains it, and is really quite lovely. 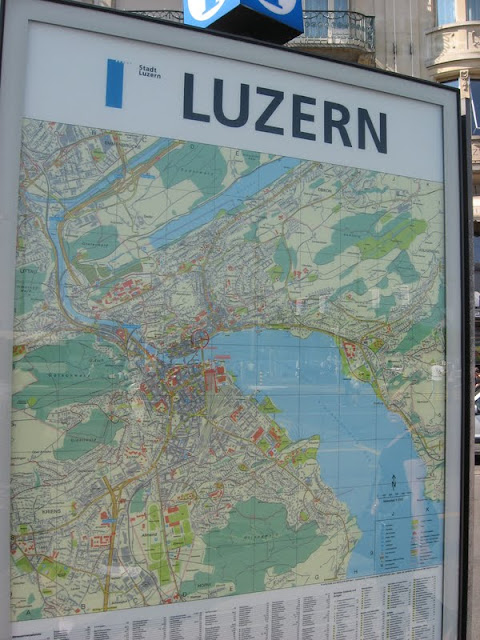 There were people out on the lake in little paddle boats, and if we'd had more time I would have loved to have joined them. The sun was shining and there was a slight breeze so it would have been lovely out on the water. Not to mention what a nice view of the city you would have had. :) 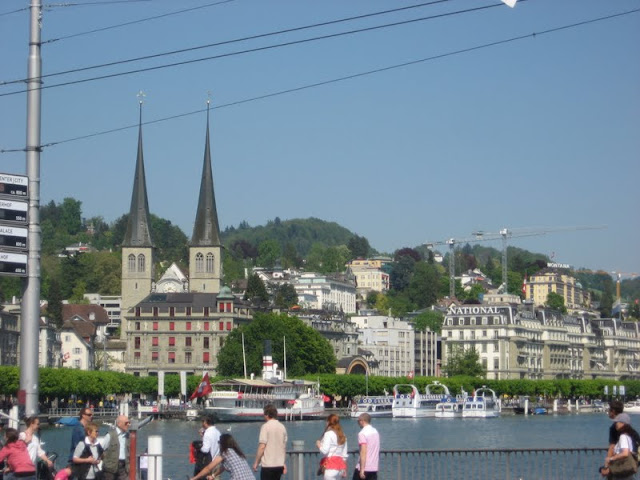 Instead we stopped at the Lion of Lucerne monument which was really quite sad. You can just see the beginning of a spear sticking out of the lion's side in the picture below. It was carved to commemorate the loyalty of the Swiss Guards who were killed at the Tuileries Palace in Paris during the French Revolution while guarding the royal family. Over 600 were killed during the fighting or after their surrender, with an estimated 200 more dying from their injuries. Only about 100 survived.

The lion is protecting a shield with the fleur de lis....and the look on his face is so very human and heartbreaking. <sniffle> 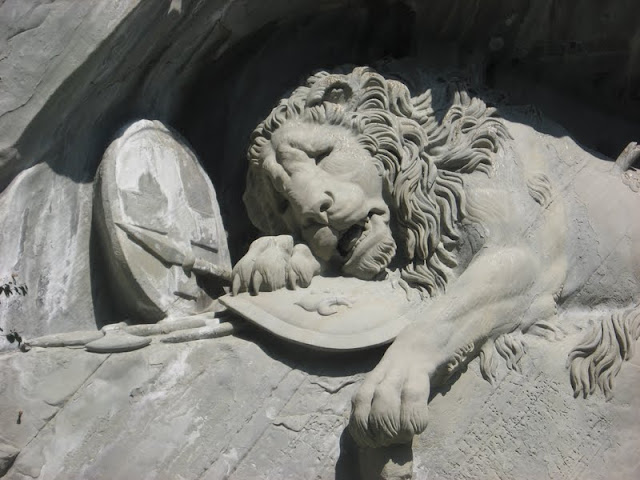 We then walked back the river's edge... 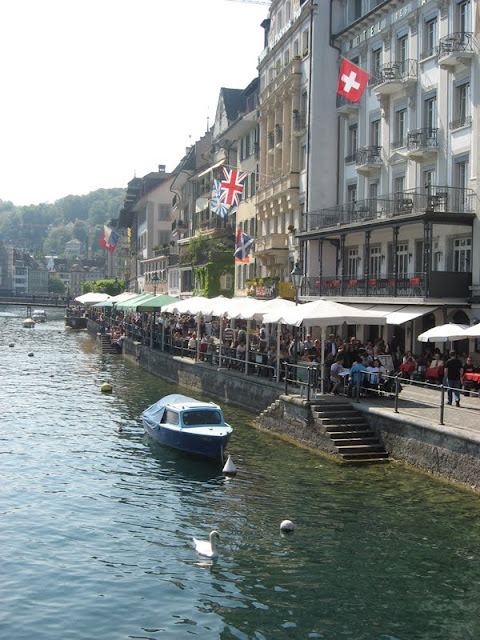 And took a few quick minutes to explore the Chapel Bridge... 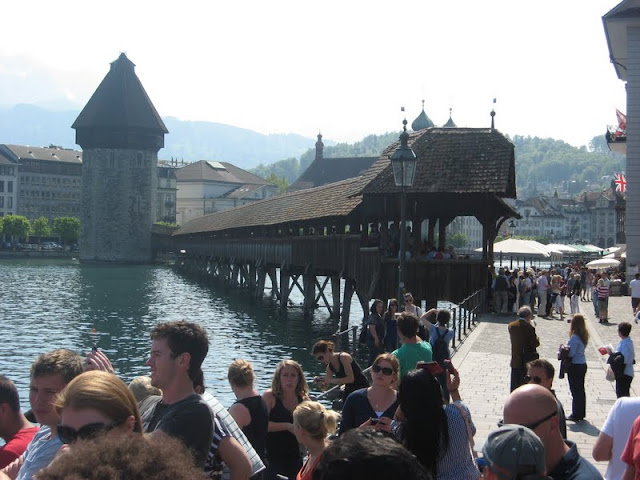 There are some really intricate paintings in the rafters depicting events from Lucerne's history. I don't have any good pictures of the paintings, so check here for an example. The tower at the far end of the bridge was once used as a prison and torture chamber, and more blandly, a municipal archive. The bridge almost burned down in 1993, destroying 2/3 of the interior paintings. You could still see some of the blackened wood inside even though the majority of the bridge has been reconstructed. 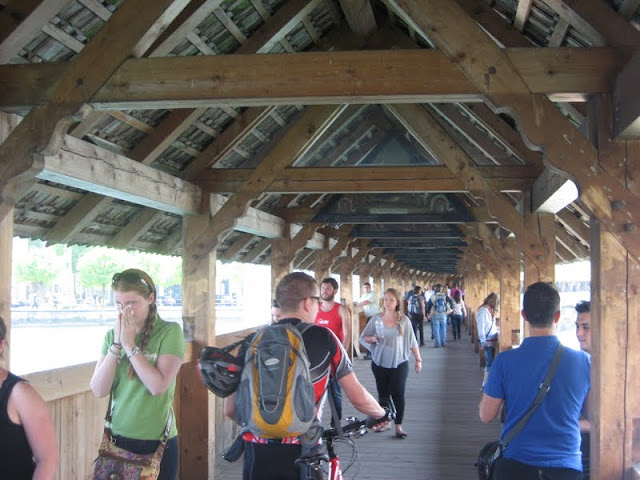 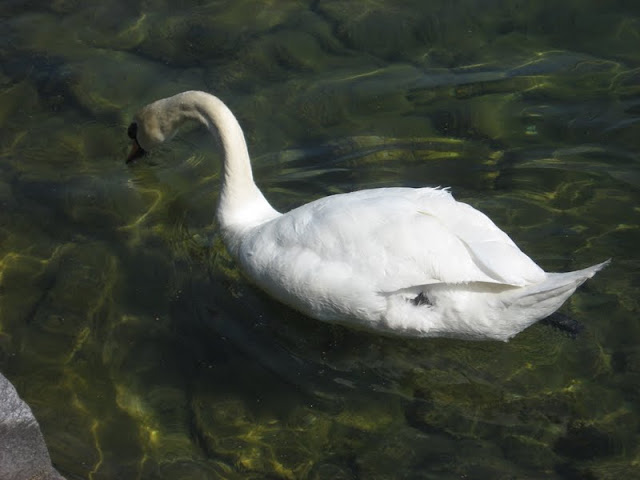 And a random Canadian flag... 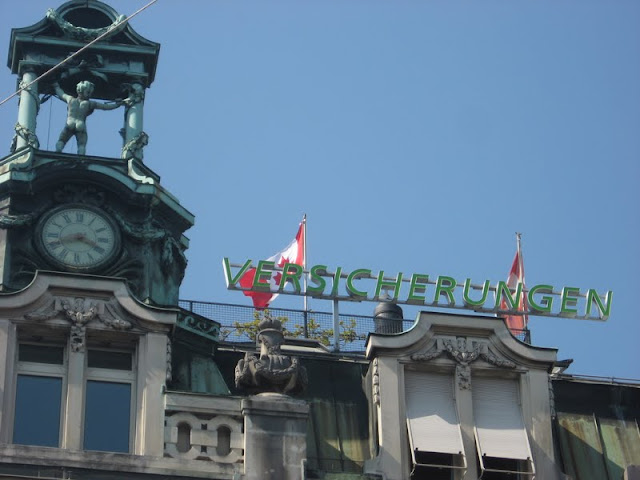 And a not so random Canadian flag, because it was given to the bus driver by one of the guys on our trip... 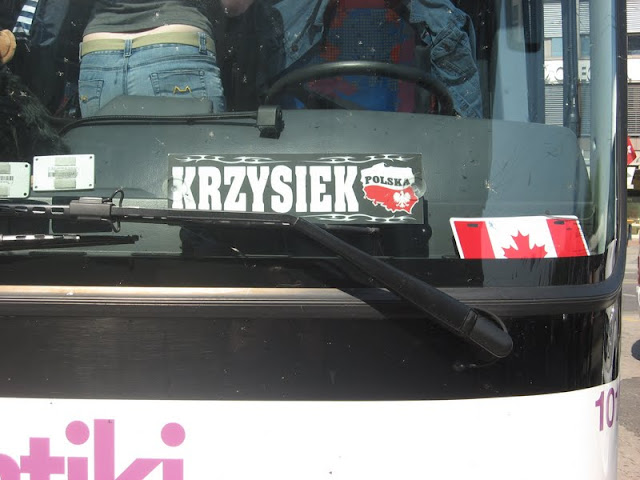 And the message board on the other side of the dashboard. The message changed almost daily, except this one stuck around longer than most for some reason... :) 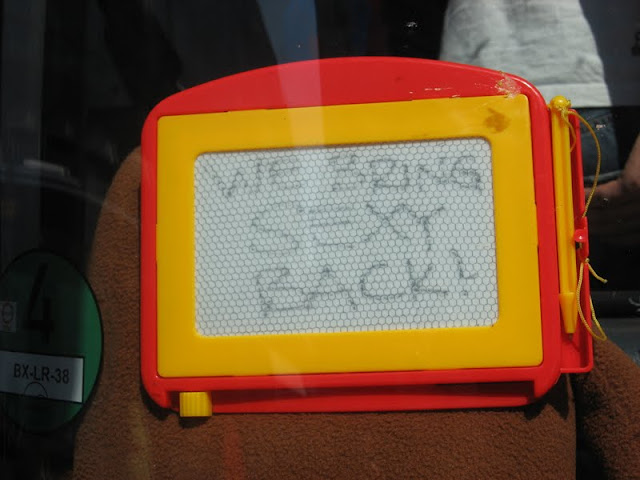 So back on the bus we went to drive through the countryside, up and down some very twisty roads, through a whole bunch of tunnels and through some pretty little valleys... 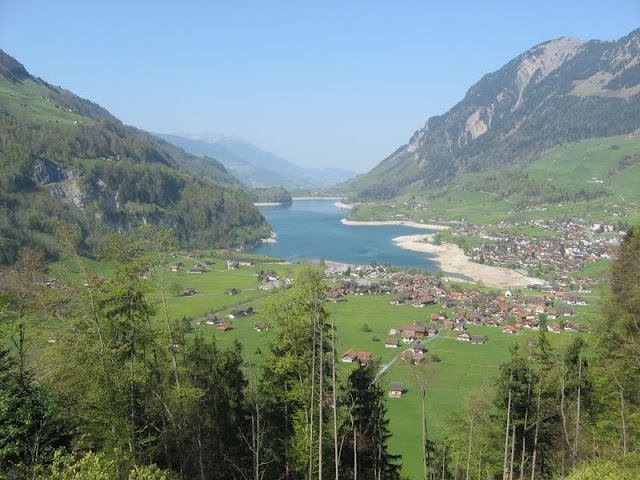 Our destination for the night was the teeny tiny town of Lauterbrunnen which was nestled in another pretty little valley with waterfalls cascading down the cliffs surrounding and huge snow-capped mountains in the distance.

I'm sure I've mentioned that Jude, our tour manager, would give us a spiel about each town we went to and each place to stay, understandably in a town this small there wasn't much to say. Just a brief description for the plans for the next day and what time dinner would be ready. 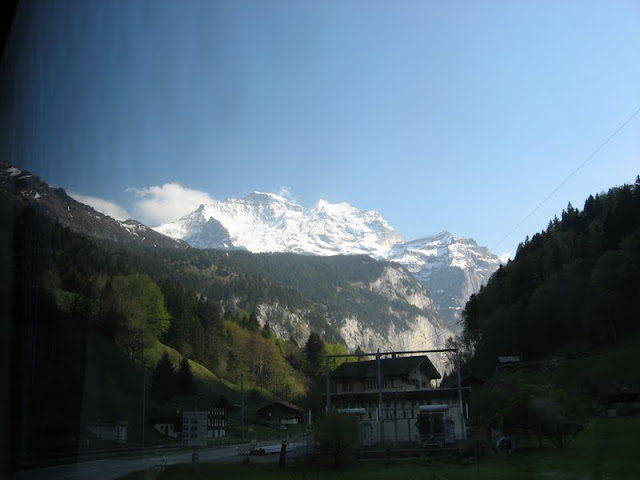 That is, except, for this one particular waterfall. It was apparently set up so that at 9:00 pm each evening the waterfall was "shut off" (for lack of a better term) and rerouted for other uses in the town. (Really, more of a village I suppose, it was that small.) 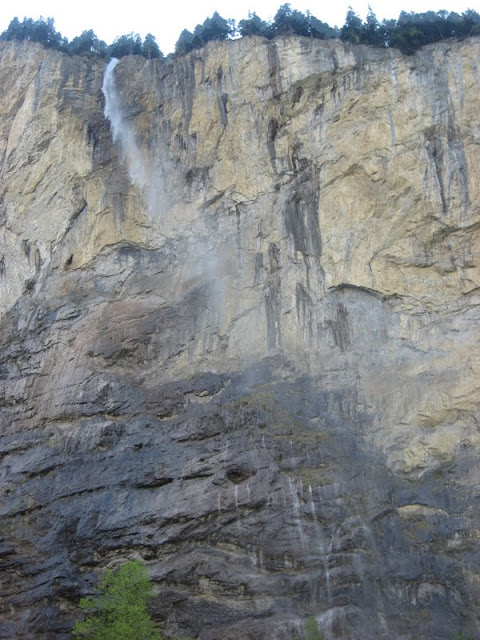 We were staying in another "campground" that was more like a collection of small cabins. There were three of us in a cabin that could have slept six, but thank goodness we didn't have the extra people as it was incredibly tiny and we wouldn't have had anywhere to put our bags with six of us squeezed in there. Oh, and then there was the no bathroom or sink situation. Which meant walking up the main bathroom in the middle of the night if you had to use it. Listening to every tiny sound and imagining what could be hiding behind that next cabin just waiting to jump out at you.... Creepy! (Yes, I supposed I have an over-active imagination. :)

It was Easter Friday, so there was fish for dinner. Ick. I skipped that part and just had the veggie side dishes and dessert, which I was just as happy with. 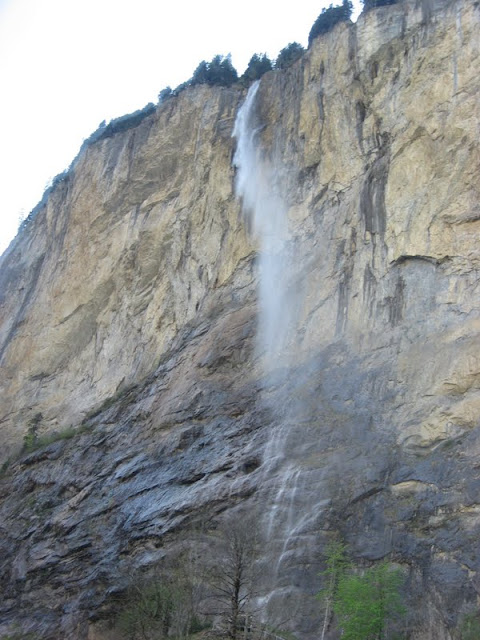 And now back to the waterfall...

Not ever having seen a waterfall shut off and since the waterfall seemed to have a spotlight shining on it and we could see it by just stepping outside the dinner hall, a group of us went outside right after we finished eating to watch the shut off.

This is where the title of this post comes into play (or, you know, for those I've already told this story) as the group of us are standing around waiting for 9:00 pm to hit. One of the girls has her camera out to record a video, and then the discussion starts.

Who has actually ever heard of a waterfall that shuts off? How does that work? And do they leave it "on" during the day for the tourists to look at? Hmmmmmm, wonder if Jude is playing another practical joke on us, she did play one on us in Paris..... No, Krysztof (the bus driver, who's name I'm sure I'm massacring the spelling of) is out here with us. If it's a joke, why is he waiting around with us... It must actually shut off. Yada yada yada....

Of course, right then, 9:00 pm hits, and Jude comes out of the dinner hall with this wierd look on her face. And we know she's got us again as we all start cracking up, laughing hysterically. It really was the funniest thing to be there, and I don't think I laughed as hard or for as long at any other part of the trip. (And that includes the bus ride where we wrote anonymous love letters to each other and then had Jude read them out to us. Some of them were sappy, others just funny and some made to be so downright creepy that they were funniest of all.)

It was especially funny afterwards to watch the video tape of it all and listen to us talk ourselves out of believing in the waterfall story, and then right back into believing it again, only to hear ten people start laughing so hard they're pretty much breathless and crying. :)

Seriously, who has ever heard of a waterfall that turns off at night?

The Other Half of the Photo Challenge